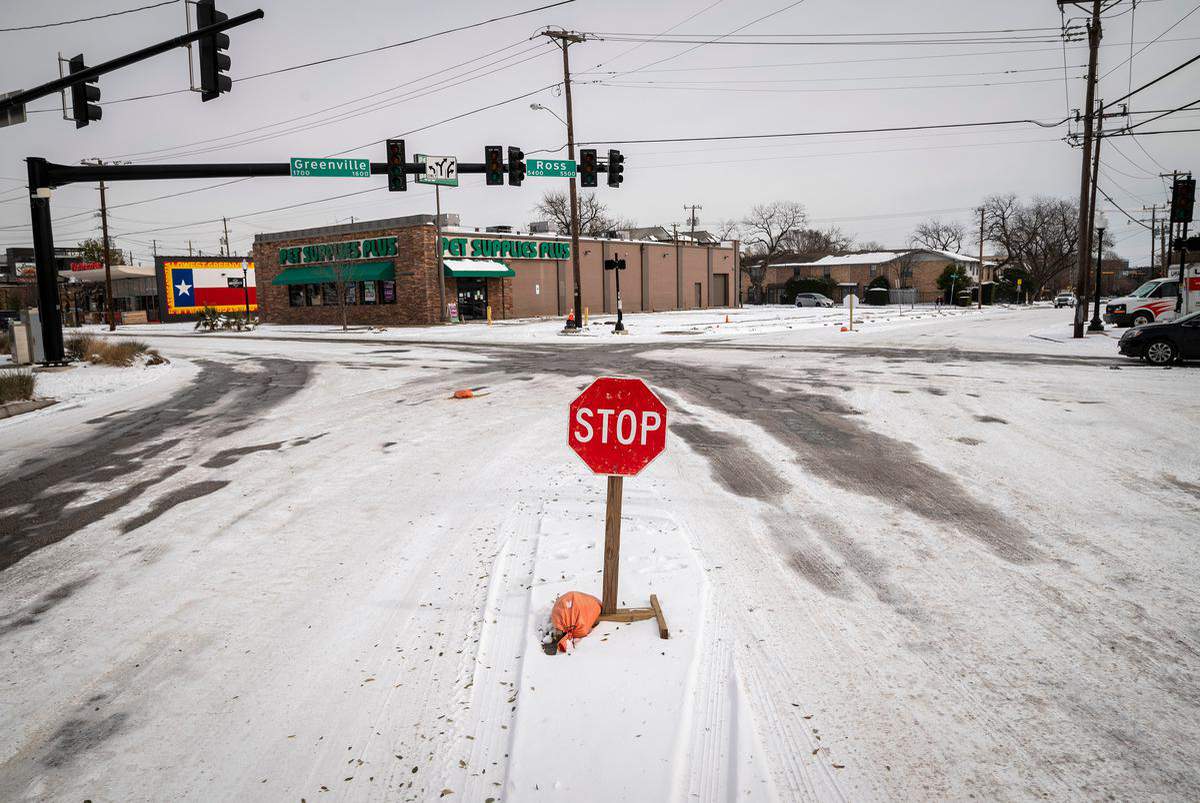 A temporary stop sign was placed at the intersection of Greenville and Ross Avenues in Dallas on Tuesday. Several neighborhoods lost power due to a winter storm that hit the state.


Sign up for The Brief, our daily newsletter that keeps readers up to speed on the most essential Texas news.

Here’s what you need to know:

[5 a.m.] Texas residents said the storm — and ensuing partial collapse of the state’s power system — sapped what mental reserves they had left after eleven months of a global health crisis that has cost thousands of jobs and claimed more than 40,000 lives in the state.

“To go through all of that and then also to have stuff like this happen, it’s like, ‘One more historical event, and I’m going to develop PTSD,’” said Brianna Blake, 31, a mother of two sons. “I cannot do this.”

Officials with the state’s energy grid operator said it is still struggling with balancing supply and demand to the Texas power grid — and could not project when long-lasting outages would end.

Meanwhile, Oncor, the largest electricity provider in the state, tweeted Tuesday night that the state’s power grid operator had directed more reductions in the electric load, and residents should “please be prepared for additional outages.” Austin Energy issued a similar warning to its customers in Central Texas and said customers who have been without power the longest could continue to be affected.

[5 a.m.] Texas largely relies on natural gas — especially during times of high demand — to power the state. From pumping it out of the ground to the plants in city centers, experts say natural gas infrastructure was unprepared for the plunging temperatures brought by the winter storm.

More than half of ERCOT’s winter generating capacity, largely powered by natural gas, was offline due to the winter storm, an estimated 45 gigawatts, according to Dan Woodfin, a senior director at ERCOT.

The outages during this storm far exceeded what ERCOT had predicted in November for an extreme winter event. The forecast for peak demand was 67 gigawatts; peak usage during the storm was more than 69 gigawatts on Sunday. — Erin Douglas

[5 a.m.] Frozen wind turbines in Texas caused some conservative politicians to declare that the state was relying too much on renewable energy. But in reality, the lost wind power makes up only a fraction of the reduction in power generating capacity that has brought outages to millions of Texans.

By some estimates, nearly half of the state’s natural gas production has screeched to a halt due to the extremely low temperatures, while freezing components at natural gas-fired power plants have forced some operators to shut down. — Erin Douglas and Ross Ramsey

Disclosure: Oncor has been a financial supporter of The Texas Tribune, a nonprofit, nonpartisan news organization that is funded in part by donations from members, foundations and corporate sponsors. Financial supporters play no role in the Tribune’s journalism. Find a complete list of them here.